Facts on the Craziest Warriors in History

Everybody knows that Scandinavian men were ardent warriors. They were restless in their appetites for the new lands beginning with trading thus developing business contacts and ending with furious raids in order to get the new piece of earth for the descendants.

The Fact №1 is that Norse people didn’t distinguish their fellow ‘Vikings’. They were separate tribes occupying the territories of today’s Denmark, Norway, Sweden, and Iceland each following their own goals.

Fact №2. To be a warrior for a Viking was a natural thing, boys were raised with swords (or axes) in their hands supposed to be lead by the one eyed god Odin into the fight of their lives. It is typical for the Viking Age to raise a fighter, however, Scandinavians really could be better in martial arts than the other Europeans. Well-disciplined and harsh, they had certain customs and rules for how to behave on the battlefield, during the raid and after. There are many records left describing the raids of the terrifying warriors who didn’t know mercy destroying and robbing everything on their way.

The strong faith made the Scandinavian men fearless in war, and the whole Viking culture was based on promoting such qualities for future fighters as strength and bravery.

Fact №3. Maybe you still don’t know it, but horned helmets are fiction. Vikings wore simple helmets made of iron and leather that protected their eyes and head. The warriors usually had light armor or just a helmet, sword and shield. Viking kings and their guards were an exception, fully equipped and provided with the best weapons. According to archaeological findings, a Viking warrior could use either a double-edged long sword or an axe, sometimes a spear and short knives for close contact with an enemy. In the other hand they held a round or triangular shield. Comparing to the other Middle Age communities, the Norse tribes were not well armed, but still the whole Europe was in awe of the Vikings martial arts and raids. Why? Find the answer in the next fact.

From the Old Norse ‘berserk’ means violent, destructive, frenzy. The fact is berserkers were the craziest Viking warriors, the outlaws who didn’t follow the Medieval war rules if such existed. They were believed to intimidate the enemy with their fury and most probably with their unusual appearance, so they can be rightfully called Vikings’ secret weapon. As described in the Norse sagas and poems, they didn’t have armor, but wore wolf or bear pelts on the naked body. According to controversial data, they took herbal drugs or mushrooms as a dope to get battle frenzy losing the feeling of self-safety and gaining unnatural thirst for blood. The other sources state that the special self-discipline rituals: living alone in the woods in very harsh conditions of the North along with the popular in  pre-Christian era shamanic practice could cause this inhuman rage. Wearing wolf and bear pelts could be a way to transform or gain the qualities of these creatures in order to shred enemies into pieces. Berserkers believed that Odin personally protected them from any harm in the battle and this added to their war passion. 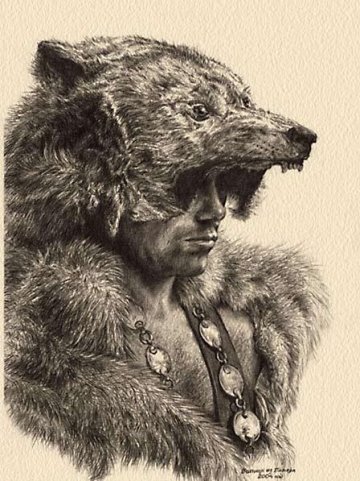 What else made Vikings the best warriors of the Middle Ages? Fact №5: Scandinavians were very religious people. They had amulets with runic symbols they wore at war and let women make magic for the good outcome of fight. The faith made them believe that the better warriors they were, the happier they would be in the afterlife. In Viking religion after death Valkyries flew over the battlefield to choose the most privileged ones to enter Valhalla, the hall in Asgard, where they would be honored to have dinner with Odin Allfather himself.

The most honored fighters were buried in longships with all of their belongings including weapons. Others, not so eminent, undergone the common ritual of cremation.